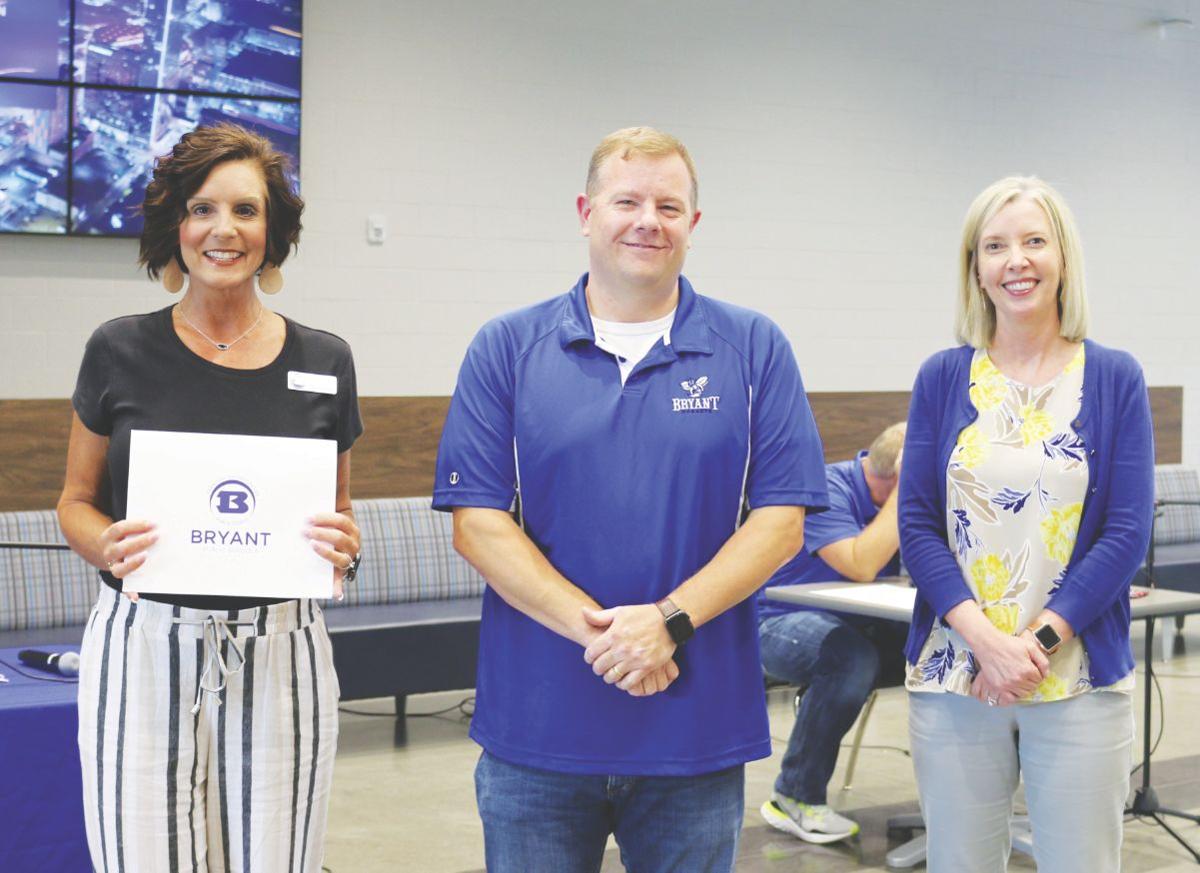 Collegeville Principal Tami Edwards accepts recognition for her school being selected a Capturing Kids' Hearts Showcase School during the Bryant School Board meeting with Board President Ben Lewellen and Student Services Director Renee Curtis. Director of Communications Devin Sherrill said Curtis has worked hard on this program with the schools. 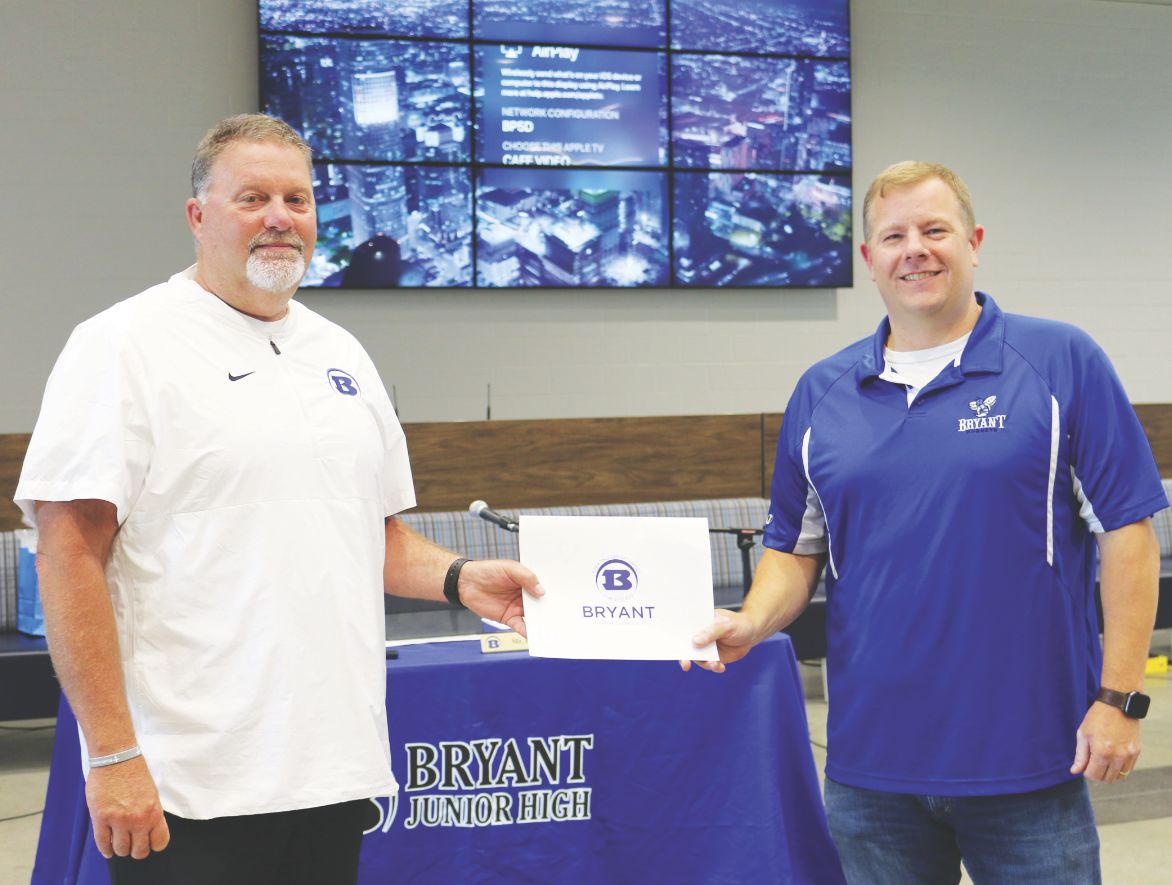 Ben Lewellen, right,  presents Bryant Football Head Coach Buck James with a recognition for being named the All Preps Coach of the Year. 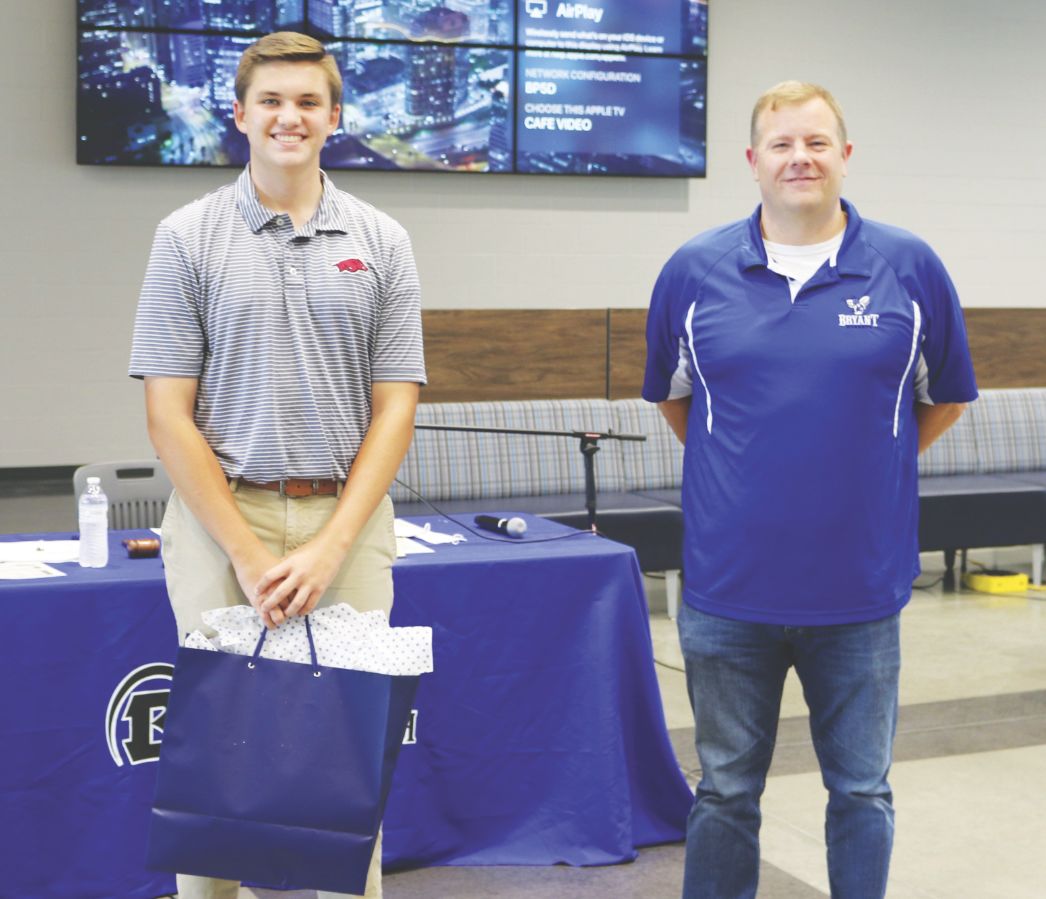 Ben Lewellen stands with outgoing Student Senate President Connor Maurer who represented students for the board. Mauer was honored for his service to the student body.

During its regular meeting Thursday, the Bryant School Board discussed both graduation and plans for returning to school in the fall.

Superintendent Dr. Karen Walters told the board the school district will officially submit its plans for graduation Monday to the Arkansas Division of Elementary and Secondary Education.

"We feel we have got a good plan," she said.

Walters estimated 400 to 420 students plan to take part in graduation.

The school wants to hold four sessions of graduation July 11. Each graduate will receivet eight tickets. Those eight will sit together with spacing between each group. The only staff member who will be on the stage with the students will be Bryant High School Principal Dr. Todd Edwards. Two board members will be able to attend each session.

Attendees will be asked to remain in their vehicles until they are let into the building for the ceremony.

The board also discussed plans for returning to in-person learning in the fall. The district plans to send out a survey asking parents if they would prefer their students learn online or mixed learning including online instruction.

Walters said the district sent out an information document in advance of the survey. So far, the school has received many questions and comments.

Walters has received a lot of concern from parents about the guidance from the state. Walters and other superintendents she has spoken with also have questions for the state that have not been answered.

She has had parents tell her if students and teachers are required to wear masks, they will not send their child to the school. Currently, the guidance requires masks for every student 10 and older.

The board expressed concerns about masks and social distancing on school buses.

Walters said she is still waiting on clarification of the state guidance.

"There are just some things I don't know we can figure out with the parameters we have been given," Walters said.

Members of the board said the school should follow the guidance and not try to make its own policies.

With the resignation of board member Danny Chism, the board needed a new secretary. They voted to elect Dr. Tyler Nelson to the role.

The board passed a COVID-19 resolution as well. Director of Human Resources and Legal Affairs Jeremy Lasiter said the resolution was needed due to the rules and laws that have changed over the course of dealing with the pandemic. The resolution allows the board to make the changes to policies as needed to keep up with changes coming down from the state.

"I don't anticipate you will have to use it a lot, but it is good to have in case the changes keep coming," Lasiter said.

The board also conducted the following business:

• Honored Head Coach Buck James for being named All-Preps Coach of the Year.

• Honored Chism and thanked him for his service.

• Heard financial reports, which Walters said is better than has been.

• Approved a revision to the memorandum of understanding with Arkansas State University Three Rivers, which was previously College of the Ouachitas. The revision updates the new name and other clean up to the MOU.

• Heard about the new updated website, which will allow one message to be simultaneously posted to four platforms.

The board held short interviews for 14 applicants to replace Chism. Two applicants did not show up for interviews.

A story featuring Muldrow will be in an upcoming edition of The Saline Courier, as well as, a story on personnel items that were passed.