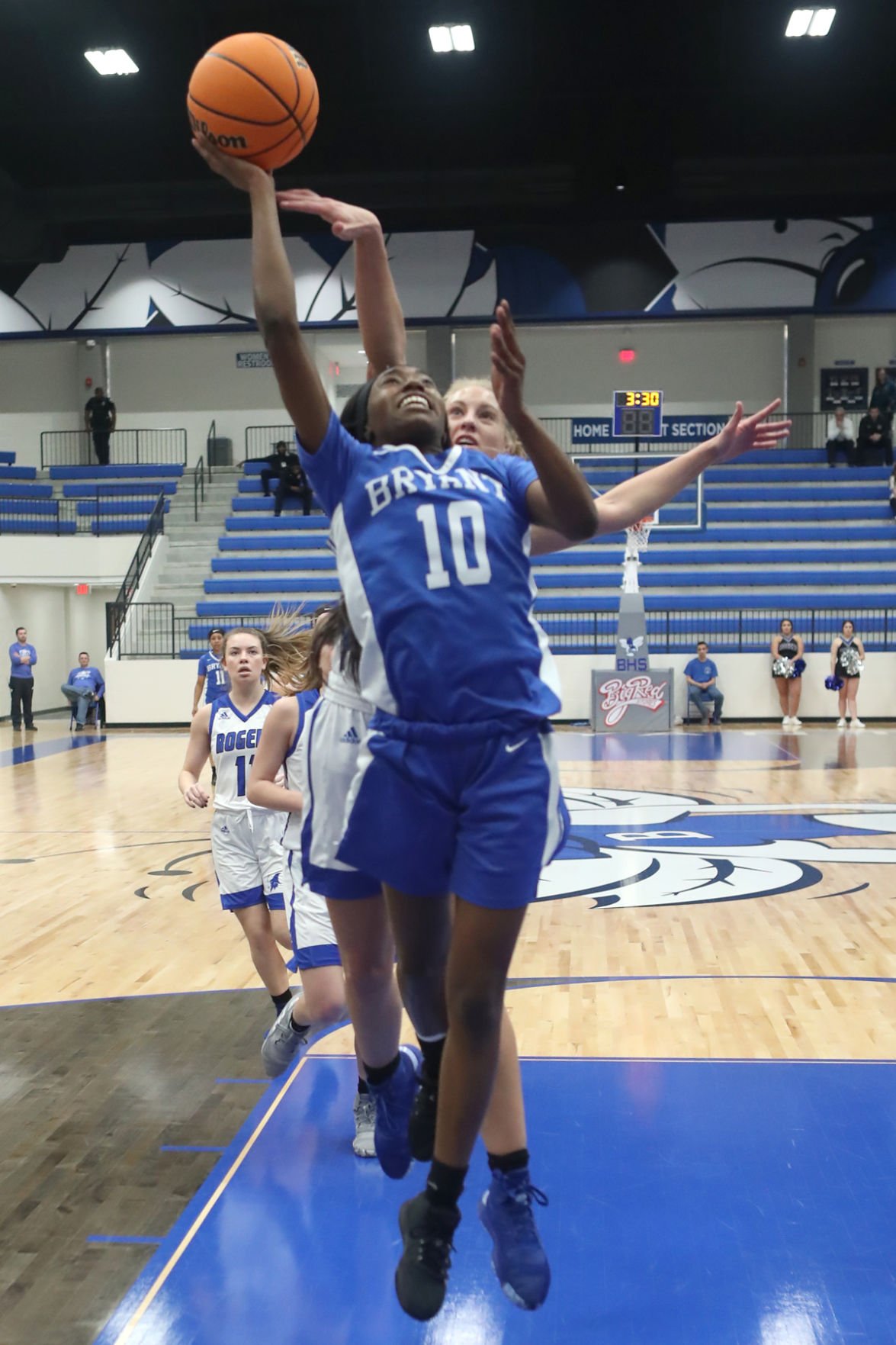 Bryant sophomore Parris Atkins goes up for a shot in a 71-55 win over Rogers in the first round of the 6A State Tournament Wednesday at Hornet Arena in Bryant. Atkins scored 19 in the win. 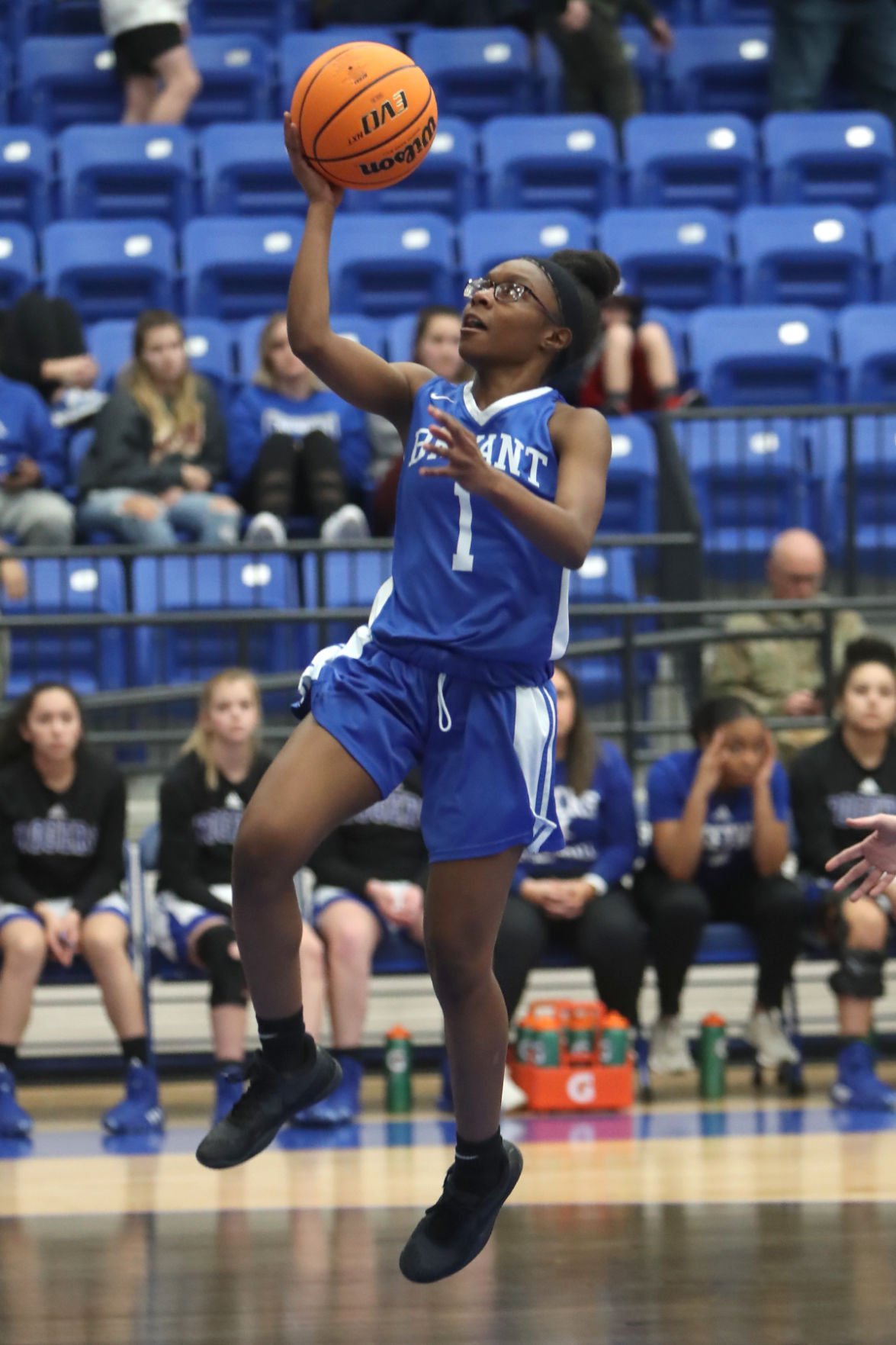 Bryant senior Tierra Trotter goes up for a bucket in a 71-55 first-round win over the Rogers Lady Mounties Wednesday in the 6A State Tournament at Hornet Arena in Bryant. Trotter scored a career-high 31 points in the win as the Lady Hornets move on to the quarterfinals Friday vs. No. 1 Northside Lady Bears.

Winning becomes easier to do when a team uses tough defense to lock down its opponent.

The Bryant Lady Hornets (17-10) showcased that fact Wednesday night in their 71-55 victory over Rogers (16-12) in round one of the Class 6A State Tournament at Hornet Arena.

“Rogers is well-coached. They’re a good team. We dug ourselves a hole early,” said Bryant Coach Brad Matthews. “Once we got active. Once we got some deflections on defense and got into transition, it made a big difference for us.”

Bryant – a five seed from the central – throughout the game scored easy points in transition. Those points were a direct result of Bryant’s aggressive defense forcing Rogers to either take tough shots or turn the ball over.

In addition to its defensive effort, Bryant was also sparked by senior point guard Tierra Trotter, who compiled 31 points and six steals.

“Before the game I told my teammates I’d do my best to help us do well and beat Rogers,” Trotter said. “Offensively, I took what was available. I drove when I saw a lane and I shot when I was left open. On defense I just played hard and got in the passing lanes whenever I got the chance.”

Bryant finished the game with a whopping total of 16 steals.

What the Lady Hornets did on defense especially set the tone in the third when they built a 14-point lead. Rogers, which had success getting good looks at the bucket early in the game, had begun to struggle in the third.

As for Bryant, it started to roll offensively. The Lady Hornets’ active defense flustered Rogers – which had a 32-31 lead at the intermission. It didn’t help that the Lady Hornets were now scoring in both transition or in half court. At the end of the third, Bryant led 57-47.

In the fourth, Rogers was unable to make a run in its season-ending loss.

During the first half both teams had moments when they controlled the action.

The Lady Mounties, a four seed from the west, led 19-14 at the end of the first thanks to making three shots from beyond the arc and playing solid defense. Trotter scored 10 of the Lady Hornets’ points in the quarter.

However, in the latter stages of the half, Bryant – which trailed by 10 early in the game – came alive.

Something else that helped Bryant was how Trotter continued to shine scoring 10 points, to go along with two steals, and an assist in the second quarter.

One of the assists came after Trotter stole the ball and cruised down the floor into the lane where she tossed a behind-the-back pass to Parris Atkins, who made an uncontested fast-break layup. Trotter’s pass not only got several “oohs” and “ahs” from the crowd, but it helped Bryant grab a 23-22 lead.

“I could’ve scored, but I wanted the assist instead,” Trotter said. “The opportunity for an assist was there so I just passed the ball.”

But Rogers survived the Lady Hornet swarm and would carry a 32-31 advantage into the intermission after Presley Risenhoover drained a 3-pointer with less than 10 seconds left in the first half.

In the third, Bryant’s defense paved the way for it to pull away from Rogers. The Lady Hornets led 57-47 at the end of the quarter. The tournament hosts held off the Lady Mounties in the fourth rolling to a double-digit victory.

Bryant returns to action Friday at 4 p.m. in round two where it will take on Fort Smith Northside, champion of the conference and the No. 1 team in the state, according to maxpreps.com.

“I’m proud of the team’s effort,” Matthews said. “This is the second year in a row we’ve won a game at the state tournament. Now we have a great opportunity against a talented Northside team.”