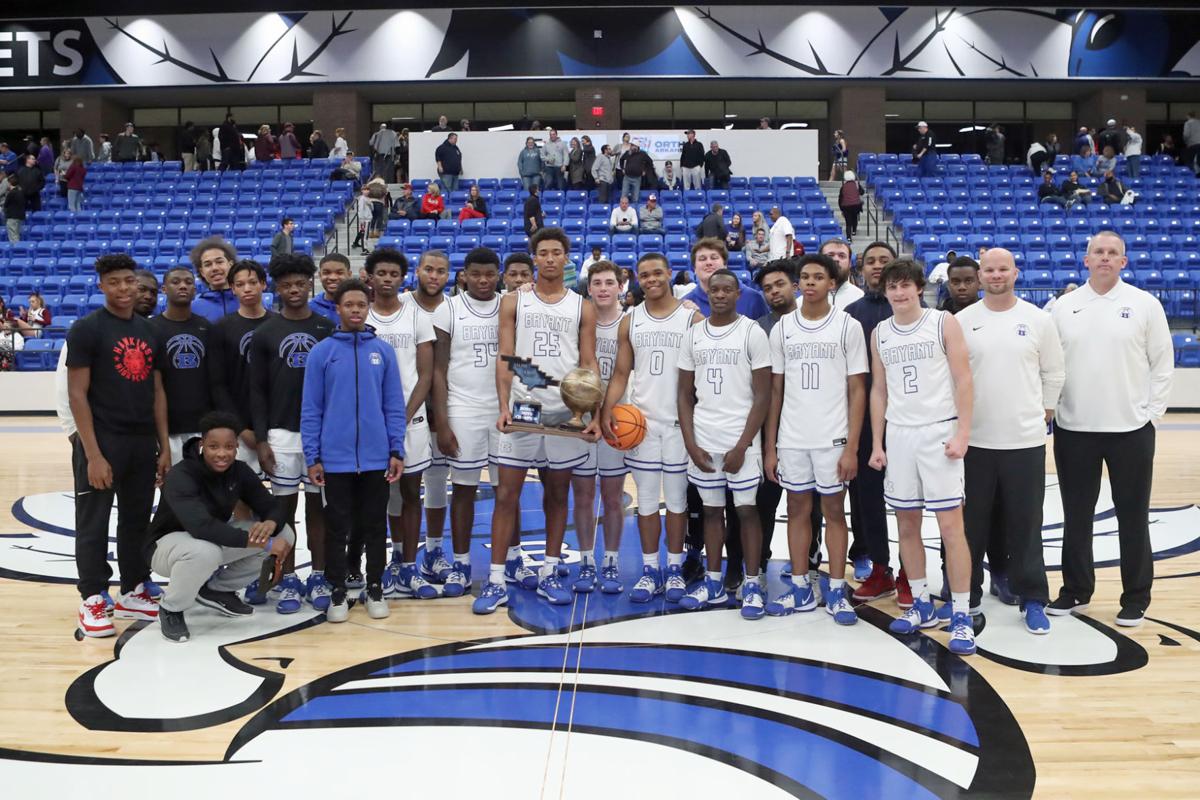 The Bryant Hornets are all smiles after defeating rival Benton 54-39 Tuesday to capture the Saline County Shootout. 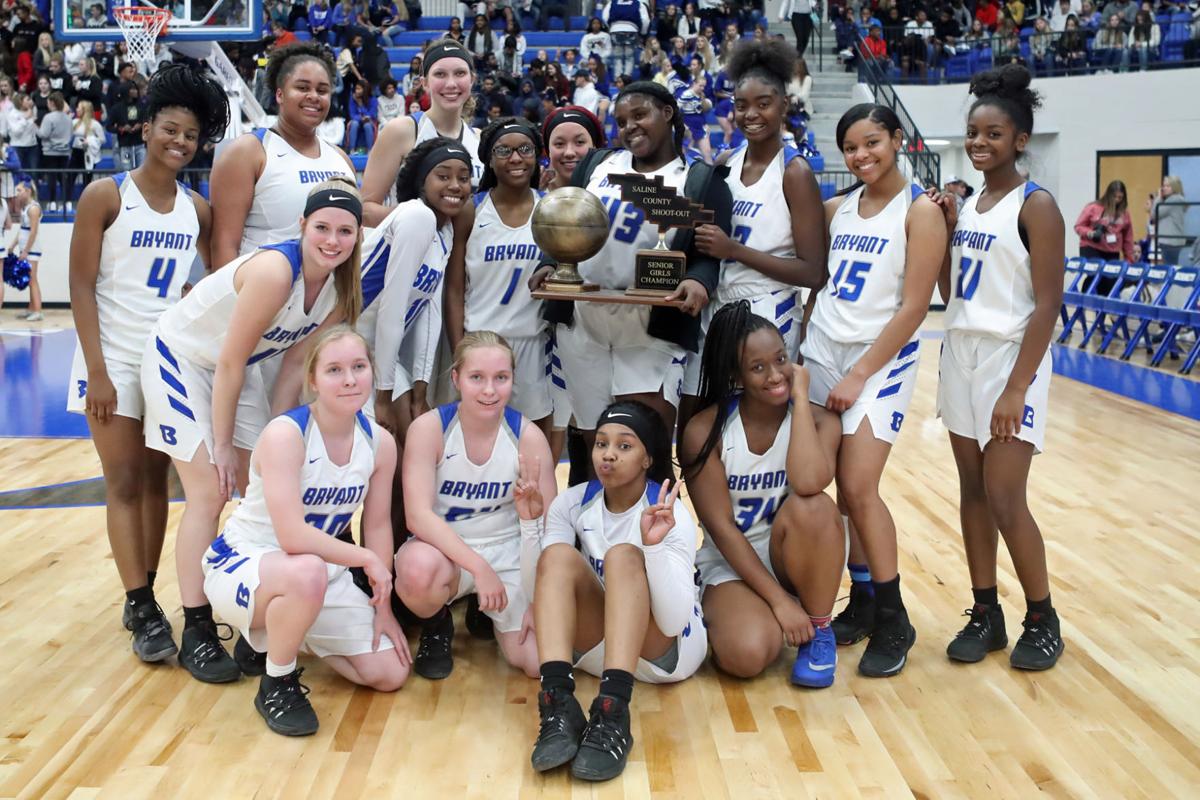 The Bryant Lady Hornets pose for a shot after rolling past Benton on Tuesday, winning 55-23 to open the new gymnasium on the high school campus. 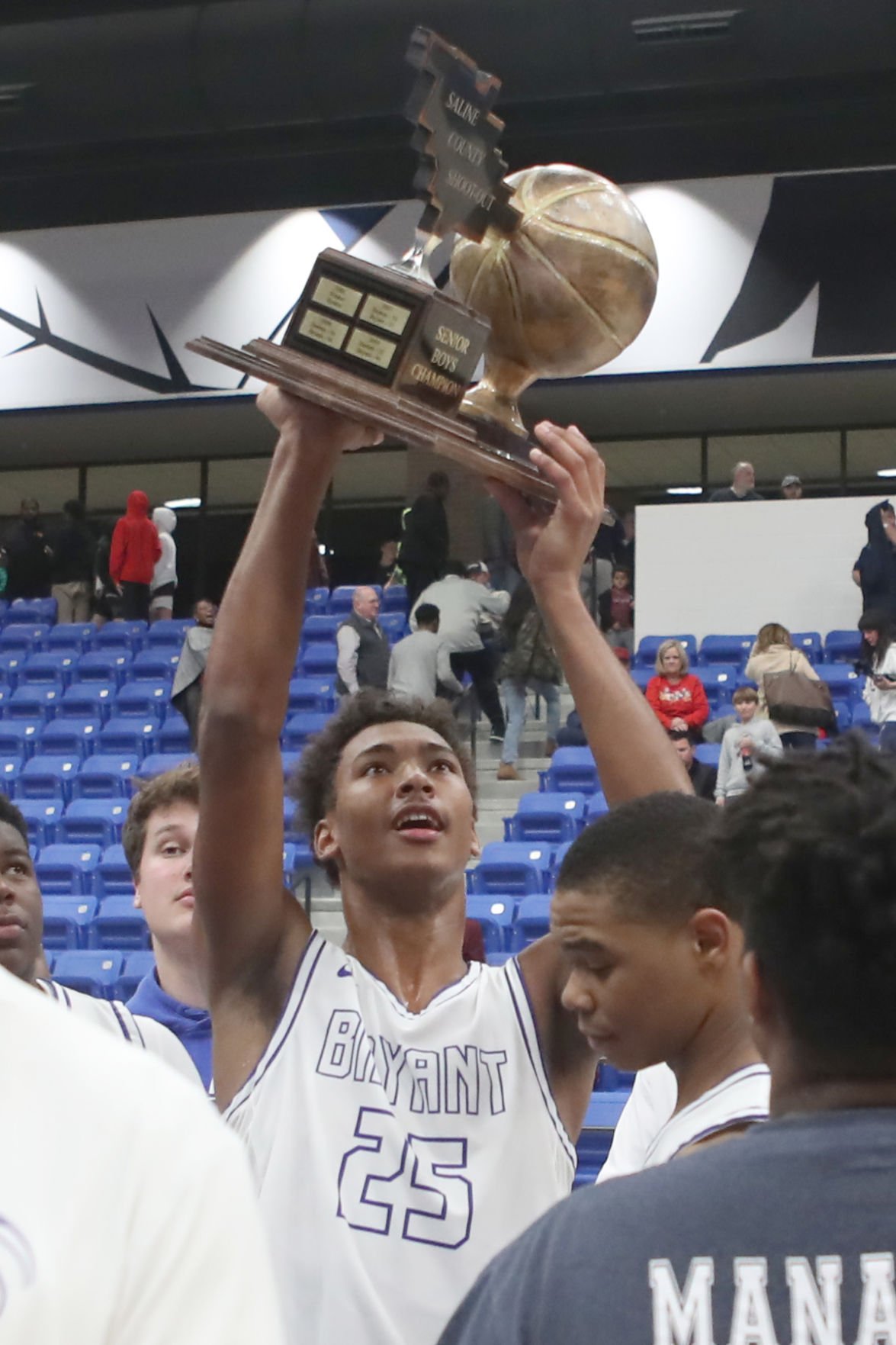 It was all Lady Hornets from the get-go on Tuesday as senior India Atkins opened the scoring with a layup and Bryant wasn’t finished until sophomore sister Parris Atkins picked off a Benton pass for a put in to put the Lady Hornets up 9-0 at the 3:55 mark of the first quarter.

It would be turnovers which hindered the Lady Panthers all night as they committed a total of 31 miscues as opposed to Bryant’s 15.

Benton senior Emily Hopper stopped the bleeding with a 10-foot jumper to make it 9-2, but the Lady Hornets resumed another 9-0 run, this one capped by senior McKenzie Muse’s 3-pointer assisted by India Atkins for the 18-2 lead with just under two minutes remaining in the quarter.

Benton junior Jordan Miller hit 1 of 2 free throws and had a bucket to make it 18-5, but India Atkins hit a three to put Bryant up 21-5 after the first quarter, and after a low-scoring affair in the second, the Lady Hornets led 29-9 at the half in which the Lady Panthers committed 22 turnovers and shot but 4 of 13 (31 percent) from the field as opposed to Bryant’s 9 of 25 (36 percent).

The second half was much of the same as Muse started the third quarter with a three, and after Benton junior Kat Simmons had a bucket assisted by Miller, Bryant went on an 11-2 run to end the frame capped by India Atkins layup for a 45-13 Bryant lead heading into the final quarter.

The Lady Hornets had 18 steals on the night with Tierra Trotter leading the way with five and a game-high 14 points. India Atkins followed with 13 points, four steals and three assists, Muse had eight points, three rebounds and three steals and Parris Atkins had seven points and two steals.

The Bryant boys almost had as hot a start as the Lady Hornets. After Benton sophomore Cameron Harris put Benton up 2-1 with a bucket, the Hornets responded with an 8-0 run capped by junior Camren Hunter’s offensive rebound and put back for the 9-2 lead. Benton sophomore Gabe George’s 1 of 2 free throws made it a 9-3 game, but 2 of 2 freebies from Hunter and a three by senior A.J. Jenkins put Bryant up 14-3 after one.

The two rivals played even in the second quarter for the 23-12 Hornet lead at the half, and Benton got within eight, 23-15, when senior Colton Phillips made an and-1 bucket to start the second half, but the Hornets would extend its lead to 37-20 after a three by senior Treylon Payne with 2:27 left in the third. The Panthers went on a 5-2 run capped by senior Jaden Nash’s offensive rebound and put back, but Payne ended the quarter with an offensive rebound and put back of his own for the 41-26 Bryant lead after three.

It would be mostly Bryant to start the fourth as the Hornets extended their lead to 46-26 after two free throws from junior Austin Schroeder and 50-30 after a bucket from Payne with 3:31 left to go before Benton closed the quarter well for the 15-point game.

Bryant will hit the road to Fort Smith on Friday to take on the Northside Grizzlies to open 6A Central Conference action, while Benton will also hit the road to Texarkana on Friday, opening 5A South action.