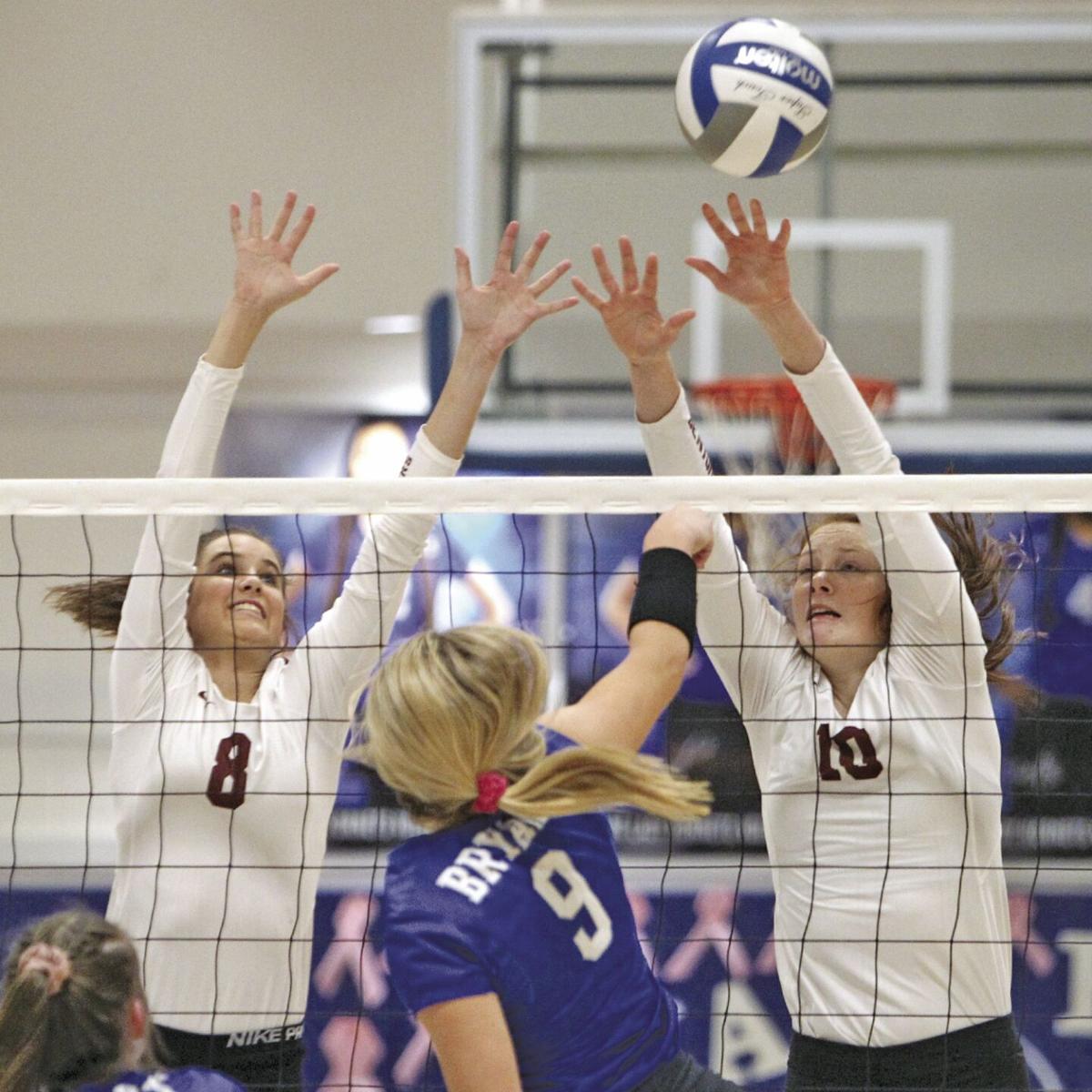 Benton junior Laci Bohannan, 8, and sophomore Abigail Lagemann, 10, go up for a block against the Bryant Lady Hornets in a match last year. Both Bohannan and lagemann will be a big part of Benton’s volleyball team this season. 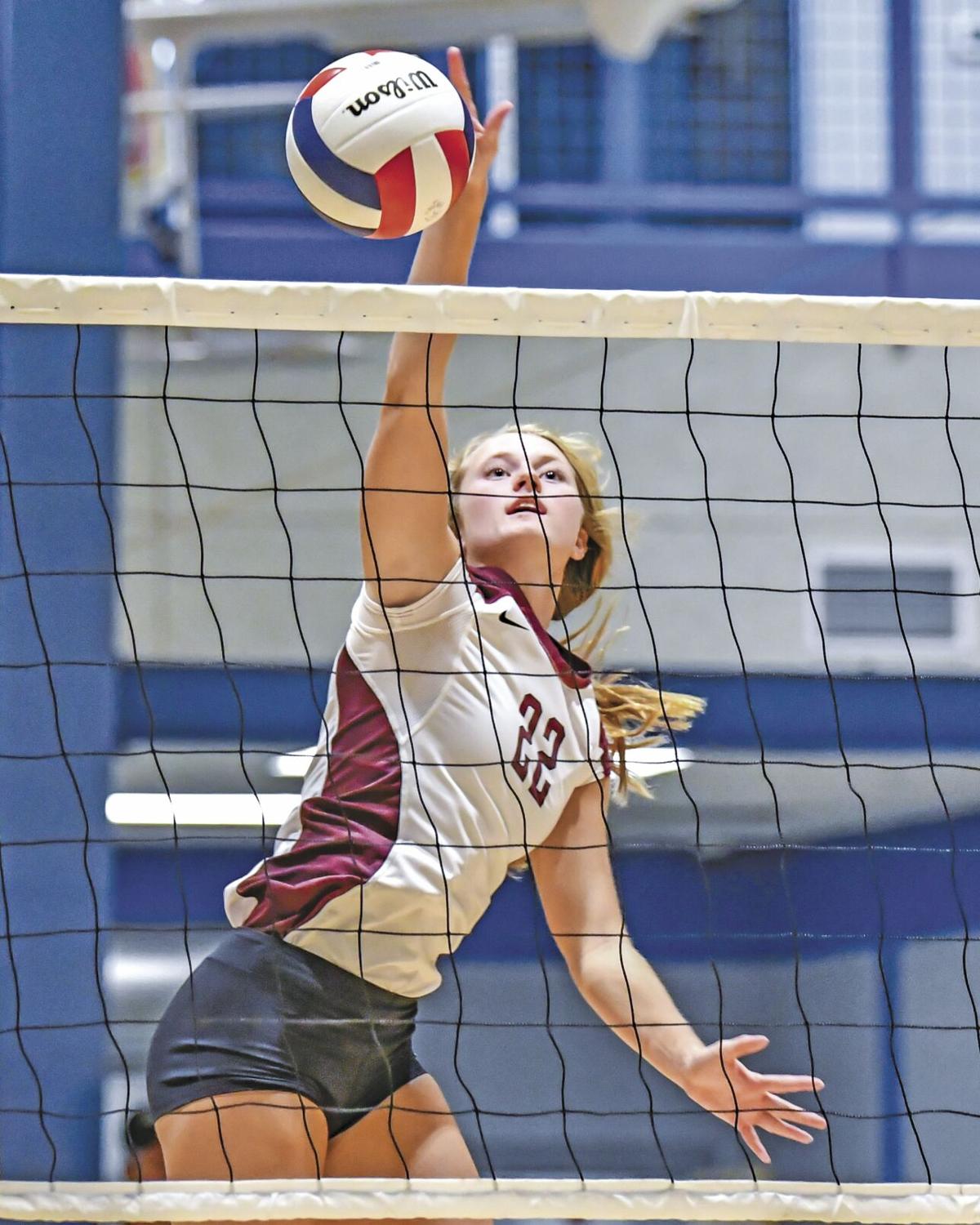 Benton senior Hannah Brewer goes up to spike the ball in a match last season. Brewer returns to the Lady Panthers after leading Benton in kills and blocks last year.

On the heels of a runner-up finish in the 5A State Tournament, falling in straight sets to the Jonesboro Lady Hurricane in the title match last year, the Benton Lady Panthers volleyball team lost a lot. Seven seniors, all of whom played a big role for last season’s runner-up squad, graduated, but good thing Benton was deep last year.

The Lady Panthers, which finished 25-4 last year, look to be deep again this year, too, though much younger. The good news is Benton returns its top three players in kills in senior Hannah Brewer (286 kills), sophomore Abigail Lagemann (236) and junior Laci Bohannan (188). More good news is the incoming sophomores from last season’s 21-4 freshman team (who were also Central Arkansas Junior High Conference regular-season champs, and runner-up in the CAJHC tourney) bring height.

“We’re going to be taller,” Benton Coach Michelle Shoppach said. “Our 10th-grade group is taller than the kids that graduated, so that’s a nice thing.”

That height means Benton will be even bigger at the net defensively even after Brewer led the way with 82 blocks last year, Bohannan was third (49) and Lagemann fourth (41).

The bad news is the Lady Panthers will have to find a new setter after three-year starter Lydia Buchanan (756 assists) graduated. But, Shoppach said there is plenty of competition at the setter’s position this year.

“We’re having to replace Lydia, who’s been a setter for three years on the varsity level,” Shoppach said. “I’m very pleased with that. I’m working with six or seven kids setting each day and (this past Wednesday) when we played, one of the points of emphasis, I think one of the juniors said, ‘Way to go, setters. You did a good job.’ So the kids are starting to see how their work is paying off, especially since we’ve gotten to go a little 6-on-6 this week.”

Though Shoppach didn’t name names, there are some players rising above that tough competition.

“Two kids stepped up and we hope they step up and they start separating themselves from the others,” she said. “Of the 22 people, I feel like we could put them all on the floor, mix them around and be very happy with the way we play.”

Another huge hole the Lady Panthers will have to fill is at the defensive specialist, or libero, position. Graduated Mary Grace Guerra was excellent last season leading the team in digs (368), service receptions (363) and service aces (65), not to mention second to Buchanan with 65 assists. But just like the competition at setter, defensive specialist looks to see the same.

“We’ve got a ton of defensive specialist, so I as a result they’re pushing each other,” Shoppach said. “There’s nobody that can lay back. They know if they don’t step up and run balls down and make a play, there is somebody right behind them that can do that.”

The chemistry has been good, too, despite the fact there are nine new sophomores, with Lagemann a freshman varsity starter last year.

“I’m pleased with how they interact with each other on the court,” Shoppach said. “I’m very pleased with how they’ve interacted with others off the court. Their skill level is good. The only weakness right now would probably be the 10th-graders just because the 11th- and 12th-graders play at a little bit better speed. We didn’t get to (meet) in April and May so they’re having to learn the speed of the game a little bit. I feel they’re good enough and they want to do well enough, they stay after even, and work on things that I think the speed of the game will come because they’re taking extra reps.”

Of course the reason the Lady Panthers didn’t get to meet in those months is because of the current coronavirus pandemic, which has impacted everyone, not just athletes, across the world in some way. COVID-19 nixed all of spring sports in mid-March and didn’t allow the volleyball team to meet until June 1. With usual camps throughout the summer, there have been none this year due to the virus which has killed over 500 Arkansans and over 160,000 Americans.

“It’s kind of like Groundhog Day,” Shoppach said. “You wake up and do the same thing the next day. I feel like it’s been that way since March.

“We’ve got 22 young ladies and I’m very pleased with what we’ve done, especially proud of this week,” Shoppach said. “The attitude in the gym has been very good, very responsive with the limitations that we’ve had. The drills that we’ve had to do, they’re doing them to the best of their ability. We’ve been able to slow down and focus on more individual skills and I think that’s going to help us on down the line. It’s been nice for us to get to do that, instead of just jumping into practice, going to a team camp, coming back, doing another team camp. It’s kind of been nice to slow down and work on more individual skills with the kids.”

Though it will be a different team from a season ago, Shoppach is looking for another title chance.

“I would like to think that every year we would be playing in a championship match,” she said. “I like to play in November.”

Benton begins its preseason with the Maroon & Gray game on Tuesday, Aug. 18, at Benton Arena before hosting a benefit game there on Thursday, Aug. 20. The Lady Panthers officially start the season on Tuesday, Aug. 25, at Greenbrier.