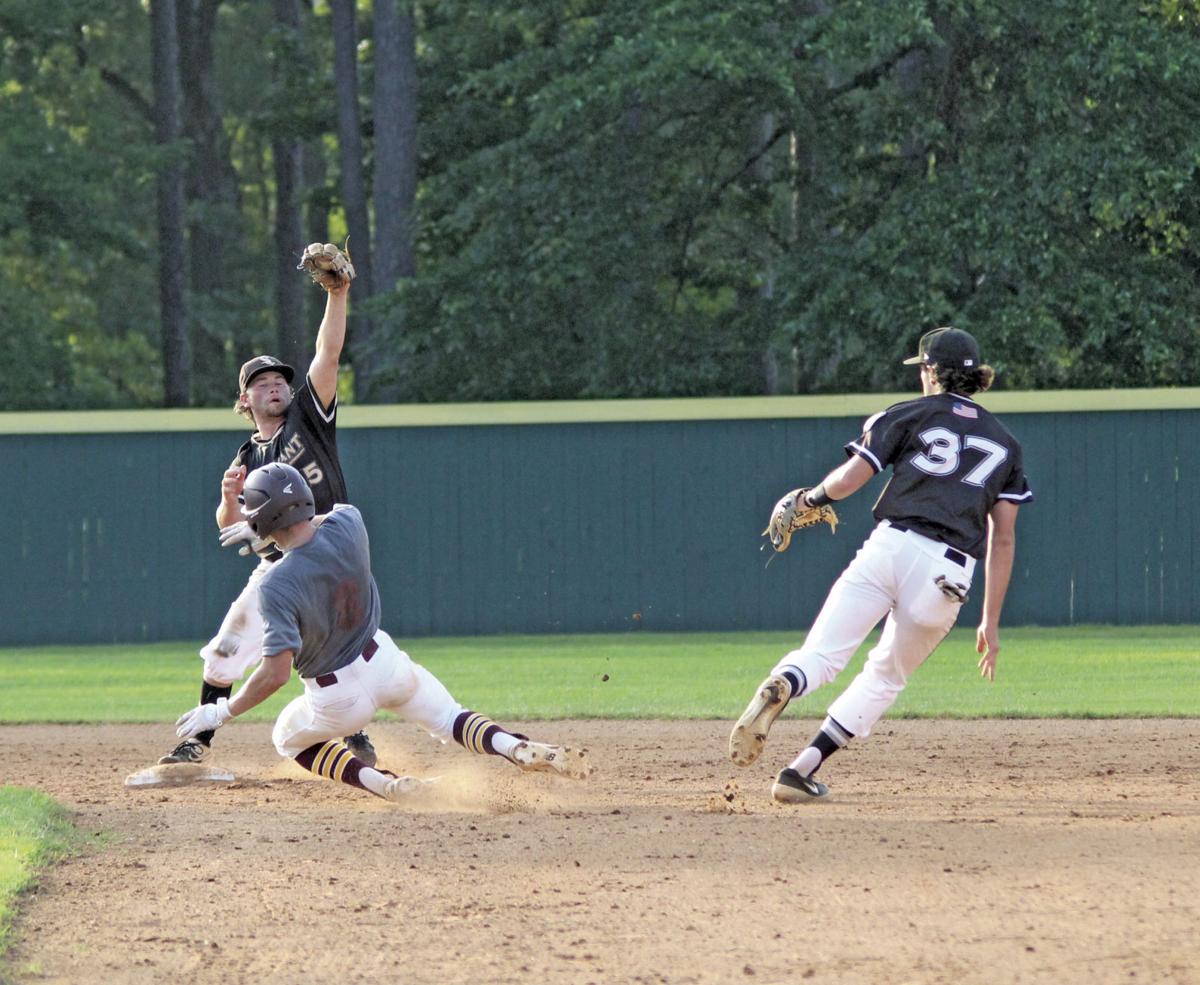 Bryant second baseman Logan Catton, 37, flips to shortstop Noah Davis for an out in an 8-3 win over Lake Hamilton Tuesday at Bryant High School. The Black Sox swept the doubleheader. 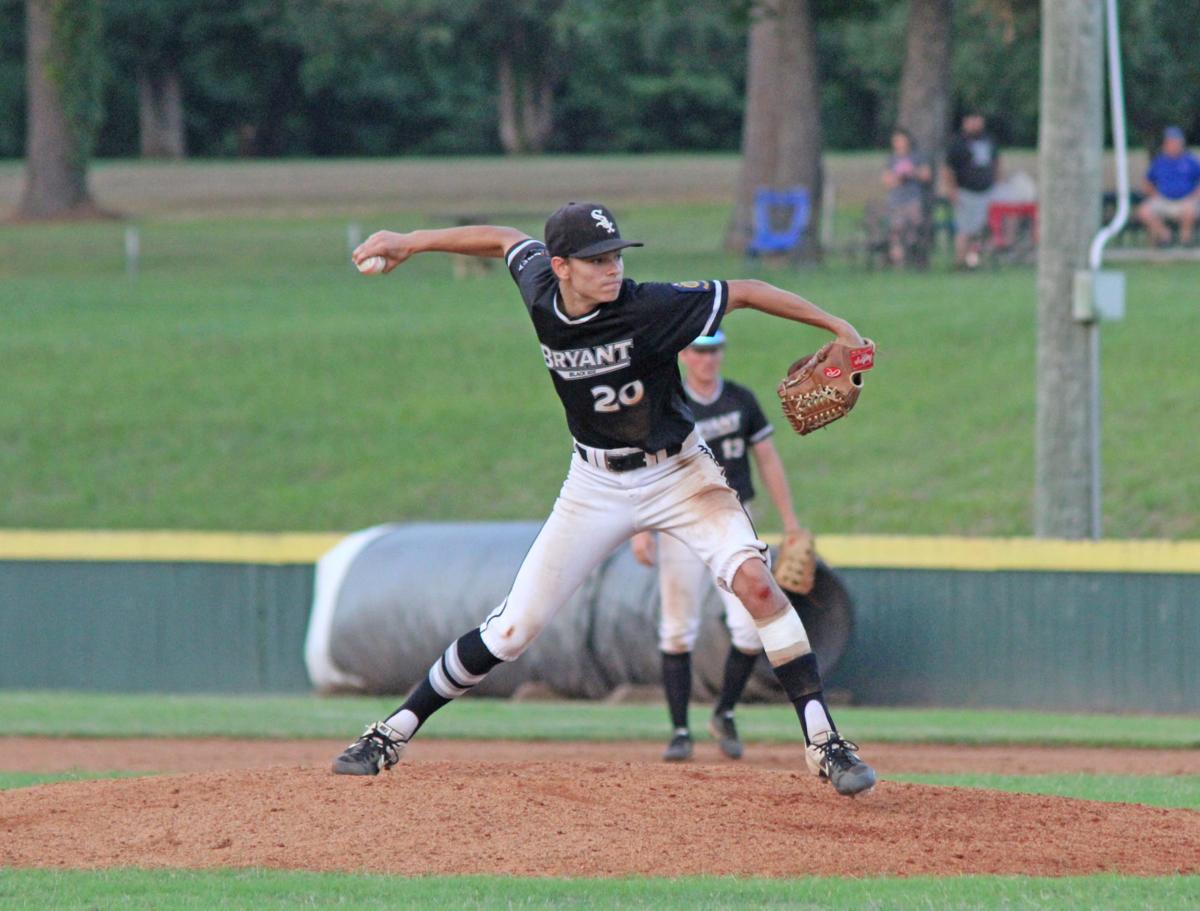 The Bryant Sr. Black Sox swept two from the Lake Hamilton Wolves on Tuesday at Bryant High School for their sixth and seventh straight victories since starting the season 2-9 to improve to 9-9 overall. The Black Sox were down 3-1 after four innings to the Wolves in the first game, but came back to claim an 8-3 victory. In the nightcap, the Sox blew out Lake Hamilton 12-0 as Blaine Sears threw a no-hitter in five innings, missing a perfect game due to a walk and hit batter.

It was the second no-hitter for Bryant this past week as Will Hathcote threw a perfect game in the Mid-Summer Tournament in Memphis, which the Black Sox swept for the title. Sears struck out three in his no-hitter while the Bryant offense gave him plenty of support.

Scoreless after an inning, the Sox got to work in the bottom of the second as Peyton Dillon led the frame off with a triple and Coby Greiner followed with a walk. Dillon scored on an error before Aaron Morgan walked. Connor Martin followed with a sacrifice fly to make it a 2-0 game as Brayden Lester, who reached on that earlier error, stole home for the 3-0 lead after two.

Bryant picked up two more runs in the third on a Morgan RBI single and Martin’s bases loaded base on balls for the 5-0 advantage before the Black Sox blew it open in the fourth with a 7-spot.

The Black Sox needed just five hits for their 12 runs as they were issued 11 walks. Morgan finished 2 for 2 with two RBIs while Logan Catton, Cade Drennan and Peyton Dillon all added a hit in the rout.

Things didn’t come as easy in Game 1 as Lake Hamilton put up two in the first off Bryant starter Joshua Turner, but Turner would give up just one more the rest of the way. Bryant scratched a run across in the bottom of the first on Catton’s RBI ground out to make it 2-1, but the Wolves responded with a run in the top of the fourth for the 3-1 lead.

But, the Black Sox would start swinging their sticks in the bottom of the fifth as Lawson Speer singled to start, took third on a mis-thrown pickoff attempt and scored on a Noah Davis single to get within a run. After a fly out, Catton singled before Drennan hit a 2-run double to put the Sox up 4-3 and they never looked back. Dillon traded places with Drennan with an RBI double of his own for the 5-3 lead after five.

The Sox put up a 3-spot in the seventh, all with two outs, as Catton singled in JT Parker, who walked to lead off the inning. After Drennan walked, Dillon hit a 2-run single to set the final score.

Turner picked up the complete-game win giving up three runs (two earned) on eight hits and three walks, while striking out five.

Offensively, Dillon led the way with a 2-for-3 day while knocking in three, with Catton going 2 for 4 with two runs and two RBIs. Speer scored twice going 2 for 2 and Drennan knocked in two while going 1 for 3. Davis also went 1 for 3 with an RBI.

The Black Sox are back in action next week hosting Paragould on Tuesday.